In this post, we ask ourselves whether there is any evidence of gender bias in the COVID-19 deaths in Ireland as has been reported in other jurisdictions. We have built on our work and that of various academics referenced in post #1 to analyse deaths by gender.

As gender is not explicitly part of the RIP.ie data, we conducted a key word search on the notices to establish the gender of the deceased. That was largely successful and further scrutiny by first name followed up by a manual search of the remaining notices of unknown gender reduced the number of unallocatable notices to a very small percentage. Those notices not capable of a gender allocation arose in the period 2010 to 2014 where full details were not available. There was also a small number of multiple entries.

When we considered the total data but split by gender, the picture was not as clear as we had expected. The graph below shows the proportion of reported deaths which are males. 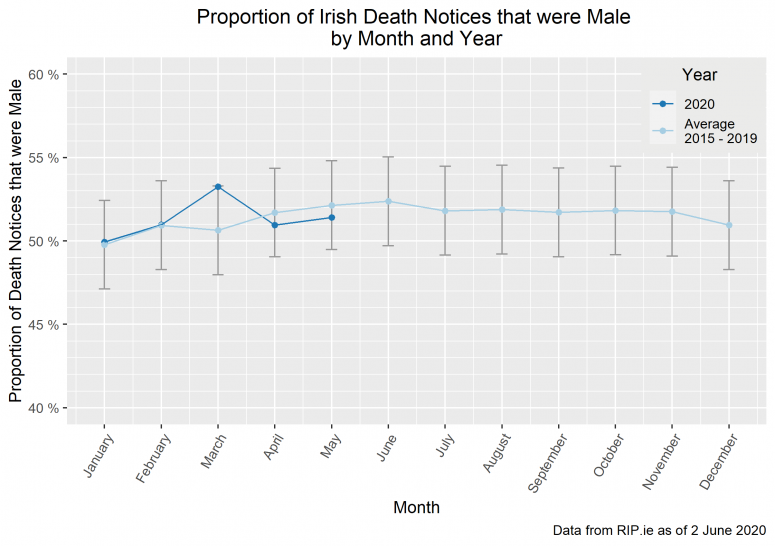 The average proportion of deaths over 2015-2019 is a little above 50% indicating a pre-COVID-19 bias towards male deaths in the population as a whole, which is normal and expected.

If the overall death rate from COVID-19 is the same as the “normal” death rate then the proportion of male deaths should be close to the average level seen in previous years. The chart above shows that overall this is the case with the proportion of male deaths being close to the average for most of 2020. Nonetheless, it is clear that in March 2020, the proportion of reported deaths which were male was significantly greater than the average for that month. This may indicate a bias in the COVID-19 death rate but as it is only one month and the variation remains just within the confidence interval shown in the graph above, there is not enough evidence to conclude that this indicates an overall gender-bias in the COVID-19 death rates. 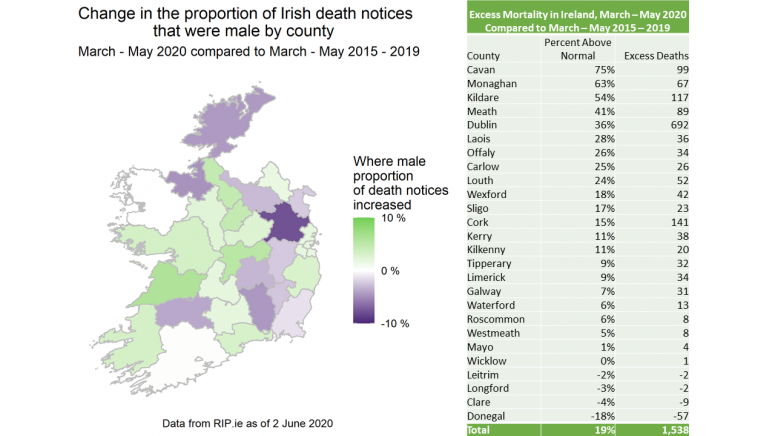 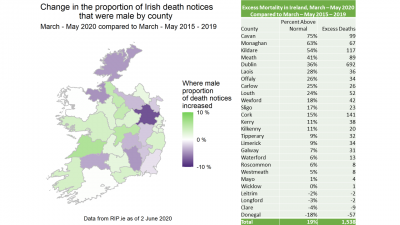 It is clear from the above that, at a county level, there have been pockets of significant excess mortality over March-May 2020 with mortality more than 50% above normal in Cavan, Monaghan and Kildare.  There are a number of counties where mortality is close to, or below, normal levels, with Donegal experiencing mortality 18% below normal for the period. There have also been pockets of increased male-bias in the reported deaths, although there are also pockets of decreased male-bias (i.e. increase in the female proportion).

The above analysis indicates that mortality has been similar to expected levels for most of 2020 but there was a spike of excess mortality in April, and May remains a little above the average. We have also observed that the proportion of reported deaths which are male has been similar to expected levels with the exception of March which saw an increase. This would suggest that overall, Ireland has not experienced the same gender bias in COVID-19 deaths as other countries have seen, as the overall gender-balance of death rate is similar to the gender-balance of “normal” death rate. On the other hand, if the death rate from COVID-19 is the same for both genders at each age, then the gender mix of the older population should lead to a higher proportion of deaths being female. As the proportion of deaths which are male has not changed significantly, there is evidence of a gender bias with males experiencing higher death rates.

It should be noted that Ireland has had a very high proportion of deaths in the care home sector. Further analysis of these points and other related topics are is needed before a more definitive conclusion might be drawn.