Has Donegal really been experiencing lower than average deaths during the pandemic?

Our regularly published Excess Mortality post contains a table illustrating the estimated excess mortality rates by county since March 2020. One particular point of note from this exercise is that excess mortality figures estimated for Donegal have, unexpectedly, been significantly negative (i.e. the number of deaths appears to have been lower than the average level). In this post, we investigate this result and consider what this means for the excess mortality figures we have observed to date; has Donegal actually experienced lighter mortality during the pandemic or has there been a change in the reporting of Donegal deaths on RIP.ie since the beginning of 2020?

To investigate this apparent fall in the number of deaths, an official source of mortality data is required to verify the actual deaths.  The Central Statistics Office (CSO) releases annual data, the latest relating to 2019 deaths. However, provisional quarterly data for 2020 is available  and we have used this this provisional death dataset as a means of verification. 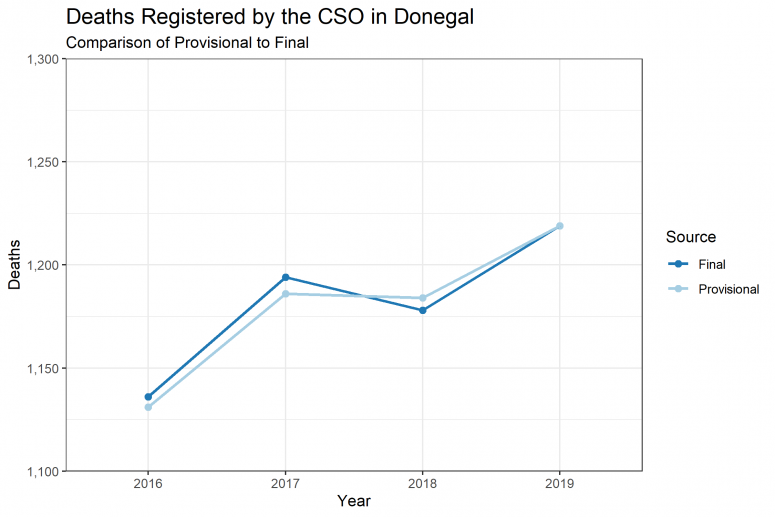 As shown, the two data sources broadly align with total agreement in 2019.  Therefore, the provisional quarterly data published by the CSO appears to be sufficiently accurate for the purposes of this analysis and, assuming that it remains valid during 2020, it can be used to investigate the observed effect in Donegal. 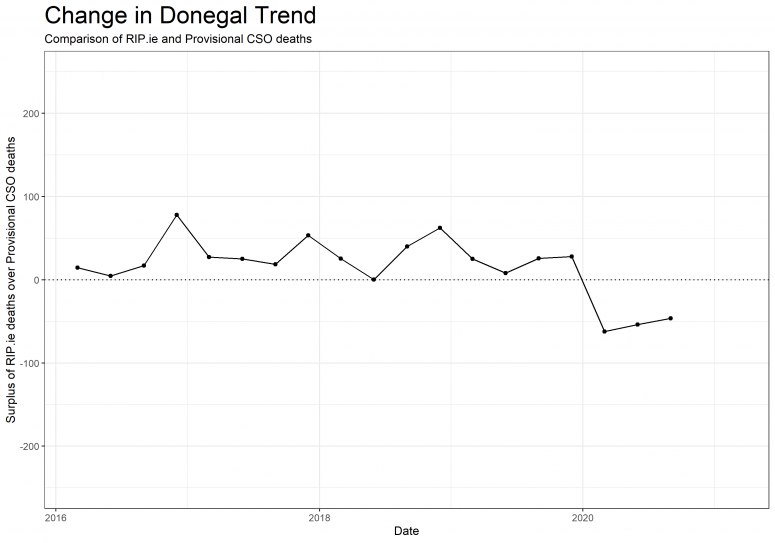 As shown, the latest three observations in Q1, Q2, and Q3 2020 show a marked change from the previous pattern; the trend of RIP.ie deaths being consistently above the provisional CSO deaths has reversed, with RIP.ie deaths being the lower of the two sources during these latest reports. Therefore, assuming that the accuracy of the provisional CSO figures remains unchanged, this abrupt shift points to a change in the use of RIP.ie in Donegal. It should also be noted that it seems unlikely that the apparent change was brought about as a result of COVID-19 enforced lockdowns; these did not begin until late March 2020 which would have had limited impact on Q1 2020 figures. Furthermore, if lockdowns were the driver of the change, a similar effect would have likely been observed in other counties, which is not the case.

It seems as though the observed negative excess mortality for Donegal is due to a change in the use of RIP.ie rather than a drop in the real number of deaths in the county. The cause of this apparent change is unknown. Deaths are reported on RIP.ie by the funeral director and changes in the use of the website could be for various reasons, such as the growth of an alternative medium in some regions. In general, RIP.ie has been shown to be a reliable source of data and the change does not seem to be significant enough to impact the national excess mortality estimations. However, this does suggest that some adjustment may be required if we wish to accurately estimate excess mortality by county on a timely basis.