Every time you turn on the news or open a newspaper these days, there is talk about excess mortality in the context of the current COVID-19 pandemic. At this stage, most people are aware that excess mortality is the number of deaths over and above those we would normally expect to die in the period (based on historical averages). We have all seen the graphs showing how direct deaths from COVID-19 account for some, but not all, of the excess mortality across the globe but what is the picture at home in Ireland[1]? How much excess mortality are we actually experiencing?
There has been a lot of great work done in this area already so this first post focuses on how we gleaned the data we used for our analysis.

Data on deaths in Ireland

The process for reporting deaths in Ireland has multiple steps, and consequently, there is a delay (of up to 3 months) before reliable death counts can be reported by State agencies. However, in Ireland, we have an alternative data source in the form of RIP.ie. Deaths are reported through this forum by family members or the funeral director typically within 2 days of them occurring[2]. There are some known limitations of this data, such as duplication due to multiple postings of the same death or dual-language posts and deaths occurring overseas but posted as a local death.

The limitations outlined above can be mostly addressed during the preparation of data for analysis (for example, by identifying multiple entries referring to the same individual death). However, our analysis of historic RIP.ie data against official death data published by the Central Statistics Office (CSO)[3] indicates that RIP.ie data is highly representative of the whole population of Ireland – over the period 2015-2018, there were 124,850 deaths reported on RIP.ie (after adjusting RIP.ie for the known limitations) compared to 122,328 in the official CSO figures (a difference of only 2%).

The map below shows a comparison of the two datasets (after adjusting RIP.ie for the known limitations) at a county level over the period 2015-2018. 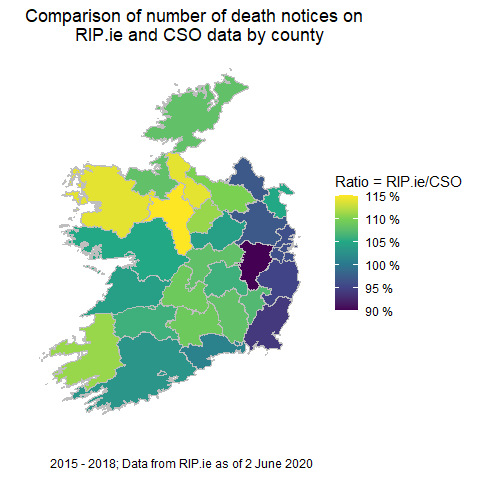 Most multiple postings in RIP.ie are for the same individual in different counties, generally the county they were born/raised in and the one they lived/died in. For the purposes of our analysis, we assigned each county an equal proportion of the death. As migration within Ireland is often for work reasons, it is common for one of these counties to be either Dublin or one of the surrounding counties. As the CSO only records the death in the county in which it occurs, our approach will result in an overestimate of deaths in the counties people were born in and an underestimate in counties they died in. This is supported by the analysis shown in the map above where Dublin and the surrounding counties (Meath, Kildare and Wicklow) are underestimated and others are overestimated.

Various academics have been doing great work on excess mortality in Ireland using data from RIP.ie, including Mr Seamus Coffey of UCC, Dr Pádraig Mac Carron of the University of Limerick, Dr Gerard McCarthy of Maynooth University and Professor Barry Smyth of UCD.

The graph below shows the number of deaths reported through RIP.ie in each month of 2020 against the average number reported for the same month over 2015-2019. We would naturally expect a single year to fluctuate more month-to-month than an average of multiple years. To help us to understand this, we have included confidence intervals[4] (the grey bars) which show the range of variation we would expect in a “normal” year. 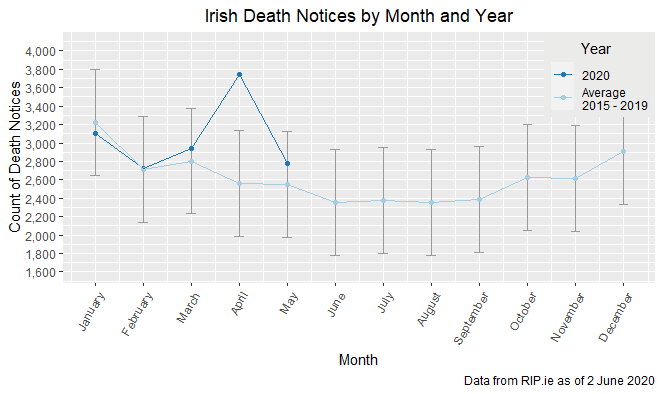 The impact of COVID-19 is clear in the graph above. The first couple of months of 2020 were similar to the average level, with the usual higher number of deaths due to the normal flu season and cold weather. From March, as we moved out of flu season, the average level starts to fall, while we saw an increase, particularly during the month of April at the peak of the pandemic where experience fell outside the confidence interval.

In our next post, we will proceed to use the above to ascertain any gender bias that may exist in Ireland.

[2] Based on analysis which we have undertaken of the difference between date of death and date of posting on RIP.ie